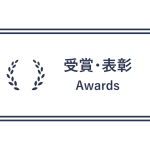 Toshio Yamagata, the Honorary Professor, received the 62nd Fujihara Award from the Fujihara Foundation of Science.

Since 1960, the Award has been given out by the Fujihara Foundation of Science to researchers who have made significant contributions to scientific and technological advancement. Toshio Yamagata has worked on and was reconized for outstanding contributions to geophysical fluid dynamics and climate dynamics, in particular to the understanding of atmospheric and ocean phenomena and the effect of their interaction on climate chance which lead to his receiving the 62nd Fujihara Award.